WARWICK/LONDON: Director General of Public Relations (DG ISPR) Major General Asif Ghafoor has said that Pakistan is indispensable and positively relevant to the world, adding that the future global economy passes through this part of the region.

The DG ISPR delivered a comprehensive talk about Pakistan and its contributions to regional peace at the Warwick University on Tuesday, to a mix of students including Pakistanis. He talked about regional geo-strategic environment, events leading to the war on terror, and the success story of Pakistan in the war against terrorism and militancy. 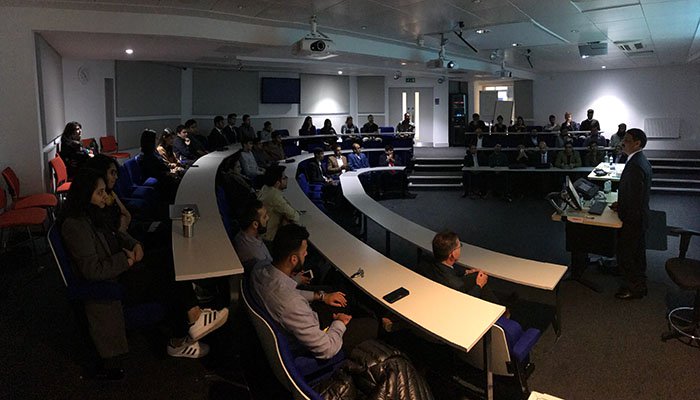 DG ISPR during his lecture at Warwick University

He said that Pakistan made available GLOCs for critical logistic support to the international forces operating inside Afghanistan without which they couldn’t have sustained. He said that Pakistani intelligence apparatus provided key information to the international forces against Al-Qaeda, which helped defeat the terror group. He said that the defeat of Al-Qaeda could never have been possible without intelligence help provided by Pakistan.

Talking about the future of Afghanistan, Major General Asif Ghafoor said that Pakistan has achieved relative stability; however, there cannot be enduring peace in Pakistan and the region if there is no peace in Afghanistan.

The DG ISPR said that Pakistan is positively relevant to the geo-political and geo-economic pursuits of the world powers in the region. “The future of the region and the globe is not without Pakistan, we have a potentially rich economy, we are bestowed with great resources, majority of our population is youth,” he said.

Major General Ghafoor explained that there was a time not long ago when terrorists were only 60 miles away from the capital threatening to take over the city and it was at that time when the conflict in the neighbourhood had spilled into Pakistan. He said the Army decided to take the threat of a new kind of terrorism head on and went on to sacrifice nearly 70 thousand people.

“It has not been without human and financial cost. The sacrifice we have paid to restore Pakistan is huge.

“These are not just pictures but our soldiers and civilians who have sacrificed their lives to make Pakistan peaceful,” said the DG ISPR while showing pictures of a few of the martyrs of Pakistan to the students and researchers.

The DG ISPR explained the peculiarities of the Western zone and said Pakistan is often misunderstood and blamed for things that the country can never think of doing. He explained how the issue of refugees and terrorism has bogged down the country, yet Pakistan has gone out of its way to help its Afghan brothers throughout by hosting them in millions and now helping them in their rehabilitation.

He told the audience that Kashmir is the mother of all disputes and Pakistan will never compromise on the rights of the Kashmiri people and will continue to offer them moral support.

He said that war is never without cost and this is paid both by the security forces as well as the local population. “Military operations alone cannot bring peace, it has to be followed up by development pronged strategies,” he said.

The DG ISPR also talked about three soft-pronged strategy, development initiatives, youth employment and deradicalisation. He showed the work done by the government and the army over the last 5-6 years in this regard. “There is still much to be done in this regard. This is the real success. If youth of Pakistan, especially from the neglected and conflict ridden areas, have similar education opportunities as the privileged youth sitting here in the university, only then real peace and stability would come to Pakistan.”

He explained to the students how a section of youth was radicalised by terrorists and used for their purposes but the Pakistan army had played a big role in deradicalisation and rehabilitated the affected youth.

He said that Noble Peace Prize winner Malala Yousufzai was attacked in Swat by terrorists who were against the education of girls and youth and the same elements threatened to take over the Pakistani society.

“No other country has withstood against the onslaught of terrorism in the manner Pakistan has. Lots of Muslim countries are in flames today because of terrorism and internal strife but Pakistan is on a positive trajectory of peace and stability. Terrorism is a global phenomenon and Pakistan alone cannot fight terrorism. Every country has to deal with it as a global response.”

Responding to a question, the DG ISPR said that raising the education level in Pakistan was very important and empowerment of the youth remained critical for the progress of the country. He said that in the last few years, nearly 500 young people from affected tribal areas got commissioned in Pakistan army while five times the figure is being given resident student facilities at army-run schools and colleges. He said that Pakistan belonged to all, to its various communities including non-Muslims.

“Pakistan Army is true reflection of our national integration. There are a few stand-alone incidents which are negatively exploited in western world due to vested interests of few. These stand-alone engineered incidents do not define Pakistan where 207 million people live with inter-religious harmony,” he stressed.

Talking about the power of youth, he said that Pakistani youth is competent, vibrant and has huge potential. He said that presently nearly 50,000 doctors are serving in USA, as well as in other parts of the world. He encouraged the youth to study and come back to serve Pakistan. “Yes, the state needs to provide you better opportunity to secure your future as well while you serve the country. Let me assure you the state is working on this to enable you the environment that serves both you and the country.”