It begins with a beckoning siren. The Sukkur Express is set to depart from Kotri Junction Railway Station in southern Sindh on its way to Karachi. With a single switch of the engine and a mighty torch upfront, the railway tracks come to life.

Amid the hundreds boarding the train are a band of six Sheedi women — an ethnic minority in Pakistan who trace the origins from tribes East Africa. The women quickly bid farewell to the male family members accompanying them to the station, as the train wheels begin to turn. Overloaded with luggage, the women are draped in warm shawls, with their heads covered.

“Did you remember to restock the paan [betel leaf]?” inquires Hakima, authoritatively, the eldest of the lot. “Yes we did, addi!” reply the other five in unison.

Singing and dancing for money at festivities was the traditional vocation for some Sheedi women of Sindh. But it is increasingly a dying profession

“Paan is to her what whiskey is to classical singers,” whispers the youngest, giggling. At that moment, the wind, bearing no respect to their purdah, sweeps their headscarves right off. Strands of their jet-black oiled hair escape their tightly-clasped buns.

The journey, like many Sheedi women in the past have undertaken, is a commute. While men in the Sheedi community are predominantly involved in occupations such as farming, factory labour, shop-keeping and blue-collar jobs, they are unable to make ends meet. The Sheedi women take on employment to help run the families.

Due to a lack of education, skill and access to economic opportinies, some Sheedi women resort to something they know best: singing and dancing. Performing at the weddings of the wealthy, they earn what is known as ‘ghor’ or ‘baksheesh’ in their language.

“Ghor is given in the form of cash,” says Professor Nuzhat William, a former dean of Government Degree College for Women in Karachi. Her family has been engaging the services of female Sheedi performers for two to three decades. The rupee notes are often placed on the forehead of the groom to ward off evil, and the women later collect them. Other times, the money is showered in the air and the performers pick it off the floor. “The more ghor showered, the greater the sense of enjoyment,” William explains. 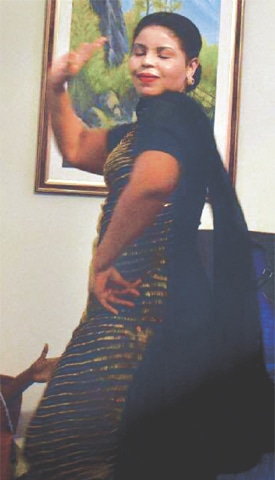 A Sheedi dancer at a wedding in Karachi

An ethnographic study titled “Sheedi Community in Sindh” and conducted in 2006, reveals that the dying profession constitutes approximately 4.4 percent of the total female Sheedi economic activities. According to researcher Sikander Ali Nizamani of Quaid-i-Azam University, Islamabad, Sheedi women take up other jobs, such as domestic work, cotton-picking and embroidery. But singing and dancing is a cultural practice that once accounted for their primary subsistence in rural Sindh.

In a 2008 article titled ‘Indian Oceanic Crossings: Music of the Afro-Asian Diaspora,’ published in African Diaspora, Shihan de Silva Jayasuriya explains how victims of slave trade used music as the main link to their ancestry. And given the sub-Saharan African roots of the Sheedi tribe, this affinity for musical expression is no surprise. Owing to their underprivileged circumstances, it also become the go-to source of income.

In August 2016, the 90th session of the Committee on the Elimination of Racial Discrimination (CERD) in Geneva, highlighted the community’s vulnerability. It presented a review of Pakistan’s periodic report which indicated how Sheedi workers, especially women, are deprived of basic government compensation and favourable economic opportunites.

During his time as a research assistant at the Centre for Social Justice, Sachal Jacob worked on the UNCERD (Committee on the Elimination of Racial Discrimination) report. Talking about the community’s restricted access to employment opportunities, he says, “There is an entire system that needs to be in place,” which begins with “education and ends with improved standards of living”. There is a subgroup within an already marginalised one, relying entirely on an art that is not quite sustainable.

The Sukkur Express train arrives two and a half hours later at Karachi — the destination for the Amu-Hakima troupe, as they are commonly known in Kotri. Amu is short for Aamna who is no longer alive. Sixty five-year-old Sakina accompanies the troupe in the capacity of protégé. Members over 40 years of age recede in the background to dictate melody, and younger ones approach the forefront to dance to the tunes. 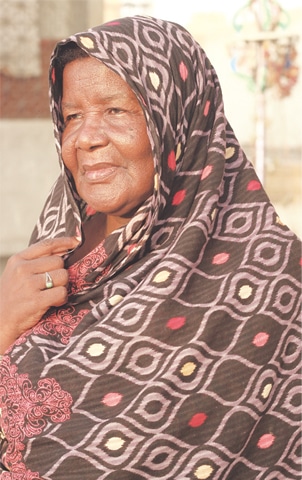 Hakima, the matriarch of the troupe

Performing groups such as theirs are often matriarchal in structure. With the torch passing from mother to daughter, they take after the serving matron’s name. Although the late Amu’s daughter, Lubna, has now taken over, the group’s name remains untouched.

For their gig in Karachi that evening, Hakima has handpicked girls from a nearby village to perform at a mayoon function — a pre-wedding South Asian ritual. At the venue, in preparation for the performance, they place an array of kitchen utensils on the floor. Lubna explains that utensils such as a steel spoon and plate, coupled with a small hand drum (dholak) and a dafli (tambourine) are enough. The ease with which the group picks up the pace of the rhythm, one can sense how music is second nature to them.

(Beloved, we celebrate you becoming a groom; with pearls and flowers, we express our joy that you are a groom)

They sing effortlessly in Sindhi. The younger lot smiles occasionally at the sight of cash being waved in their direction.

Festivities are a practical business for the young Sheedi women. “We charge an advance booking fee of 10,000 rupees,” says Lubna. The total amount of ghor collected varies as it depends on the size of the gatherings. “There have been instances where it has even amounted to 100,000 rupees,” she says. At the mayoon, though, they bag a wad of cash upwards of 50,000 rupees. This ghor sustains a family of 10 for three months. As demand for their once sought-after performance has dwindled, this is hardly a regular income.

Festivities are a practical business for the young Sheedi women. “We charge an advance booking fee of 10,000 rupees,” says Lubna. The total amount of ghor collected varies as it depends on the size of the gatherings.

To an onlooker, the mechanics of the profession may bear semblance to the mujra — a dance form performed by courtesans during the 16th century Mughal rule. Thus, many consider it taboo. 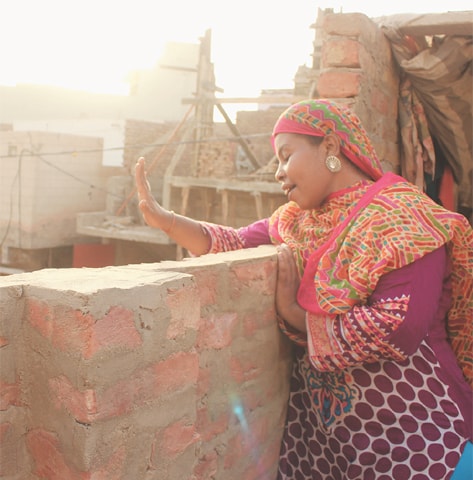 In many parts of Sindh the Sheedi women’s vocation is therefore looked down upon. “I often wonder where they go wearing such glittery, figure-hugging clothes,” says Ambo Jogi, 35, with a hint of disdain. Speaking for a documentary, Jogi, a resident of Sheedi

Paro in Tando Muhammad Khan district, says, “I have even forbidden my wife from meeting Sheedi women who sing and dance for a living.”

Gulnaz’s eyes tear up as she talks to Eos about the stigma attached to her family profession. She believes her mother and grandmother’s line of work to be worthy of reverence. “We are not prostitutes,” she says. “We are folk musicians, who are supposed to be well respected in society.”

Hakima’s son and a folk musician by profession, Tahir Mithu, expresses the utmost regard for what has been the career of many Sheedi women traditionally. Even after he shot to fame with his one-time performance in Coke Studio, he did not discourage his mother from her work.

Every year, during the Islamic months of Rabi’ al-Awwal and Zil-Hajj, when wedding season is in full swing, Sheedi households are served with a saadh or invitation, summoning them to perform at weddings. 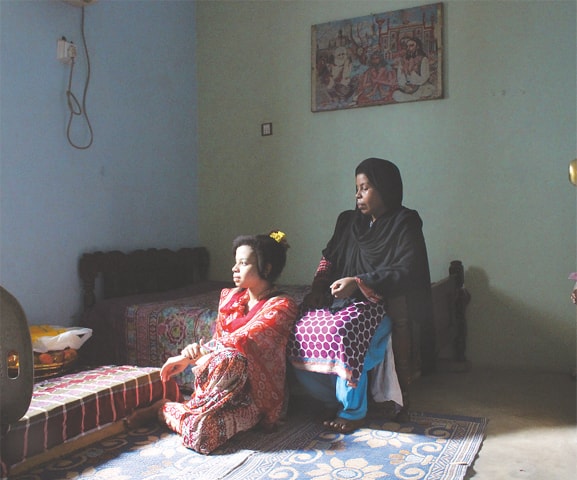 Lubna and her daughter, Laraib

Since Sheedi community members at large follow a strand reminiscent of the Sufi school of thought in Islam, Sufiana text is also part of the selection of music for events. In recent years, however, cultural sehra songs have mostly been replaced with spiritual kalam; the former are folk songs sung primarily at festivities in Sindh and the latter is the recitation of text or poetry of spiritual nature.

For Ballu Qambrani, 51, this evolution has occurred in the light of accusations rendering even self-identifying Muslim members of the community as non-believers. Qambrani, like may others of his community, was forced to relocate to Badin from Karachi, with his wife and children.

“After 2010, social attitudes changed for the worse,” he says. “We were driven out of our home in Manghopir by militant groups,” he recalls, “but there was nothing we could do.” And while displaced geography is not a new phenomenon for the Sheedis, being labelled infidels is.

Hence to protect themselves, Sheedi folk musicians decided to reemphasise their religious beliefs through their profession. “You will hear Ya Ali cries at a Sheedi Mela more than anywhere else,” Qambrani points out.

After the mayoon function, the troupe heads back to Kotri the next morning. With faces covered and the proceeds of the evening tucked away, they brace themselves for the judgmental air associated with the city that is their home.

“You girls did remember to buy paan, didn’t you?” asks Hakima, again. But this time around, all she gets is a mere nod.

On arrival, Lubna, a single mother to her daughter Laraib, is the first to say goodbye to her fellow travellers and makes her way to her brick house in Kotri’s Sheedi Mohalla. Unlike the family she was born into, Laraib does not wish to pursue her mother’s profession in the future.

The same is true for many young girls who are increasingly breaking away from the age-old profession. They are now acquiring education and vocational training. This is an uphill battle to overcome the odds and pave a more meaningful path for girls in their community.

Some still continue to believe their paths are predetermined, environmentally as well as socially. “I came into this profession to follow in the footsteps of my mother, who had taken after hers,” says Ghazala, 30, who is one of the dancers in the Amu-Hakima troupe. “There was never really a choice given, this was all we had ever known,” she adds.

Standing in front of a small mirror mounted on her living room wall, Lubna removes her heavy silver earrings. Three cramped rooms, with a dozen residents to occupy them, her dwelling enjoys the single luxury of an air conditioner.

“This profession might not sustain us for much longer,” says Lubna, as she pauses to glance at her daughter who is busy preparing for her intermediate exams, “but hopefully it will not have to.”