The Kartarpur Corridor Is More Than A Symbol Of New Peace

The legend of Guru Nanak’s samadhi and grave is one of the most popularly known stories about him in Pakistan.

At Kartarpur Sahib, outside the main shrine which contains Guru Nanak’s samadhi, is his grave. He might be one of the only people in history to have both a samadhi and a grave. Legend has it that when Guru Nanak passed away, an argument ensued among his Muslim and Hindu followers if he should be buried or cremated.

He was born into a Hindu family but his philosophy had a strong tinge of Islamic monotheism.

Some of his earliest influences — Syed Hassan, Rai Bular and his Persian and Arabic teacher, Maulana Qutubuddin — were Muslims.

Later, he came to celebrate Baba Fareed Ganjshakar and idealised him as a true Muslim. His closest friend and lifelong companion, Bhai Mardana, was a Muslim.

It is believed that to resolve this disagreement, Guru Nanak appeared as an old man and suggested to resolve this matter the next day. When they returned the following day, instead of the Guru’s body they were said to have found a huge pile of flowers, which his devotees divided equally and cremated or buried accordingly.

The first and only time that I visited Kartarpur Sahib in 2013, there was a Muslim family that had entered with me.

While the police officials at the entrance asked for my reason of visiting this ‘non-Muslim’ shrine, the family was allowed to enter unquestioned.

Inside, I saw them one by one, paying their offerings to the grave of Guru Nanak, just like devotees do at the shrine of Sufi saints. I was told by the local caretakers how several Muslims from the neighbouring villages still come to the gurdwara. 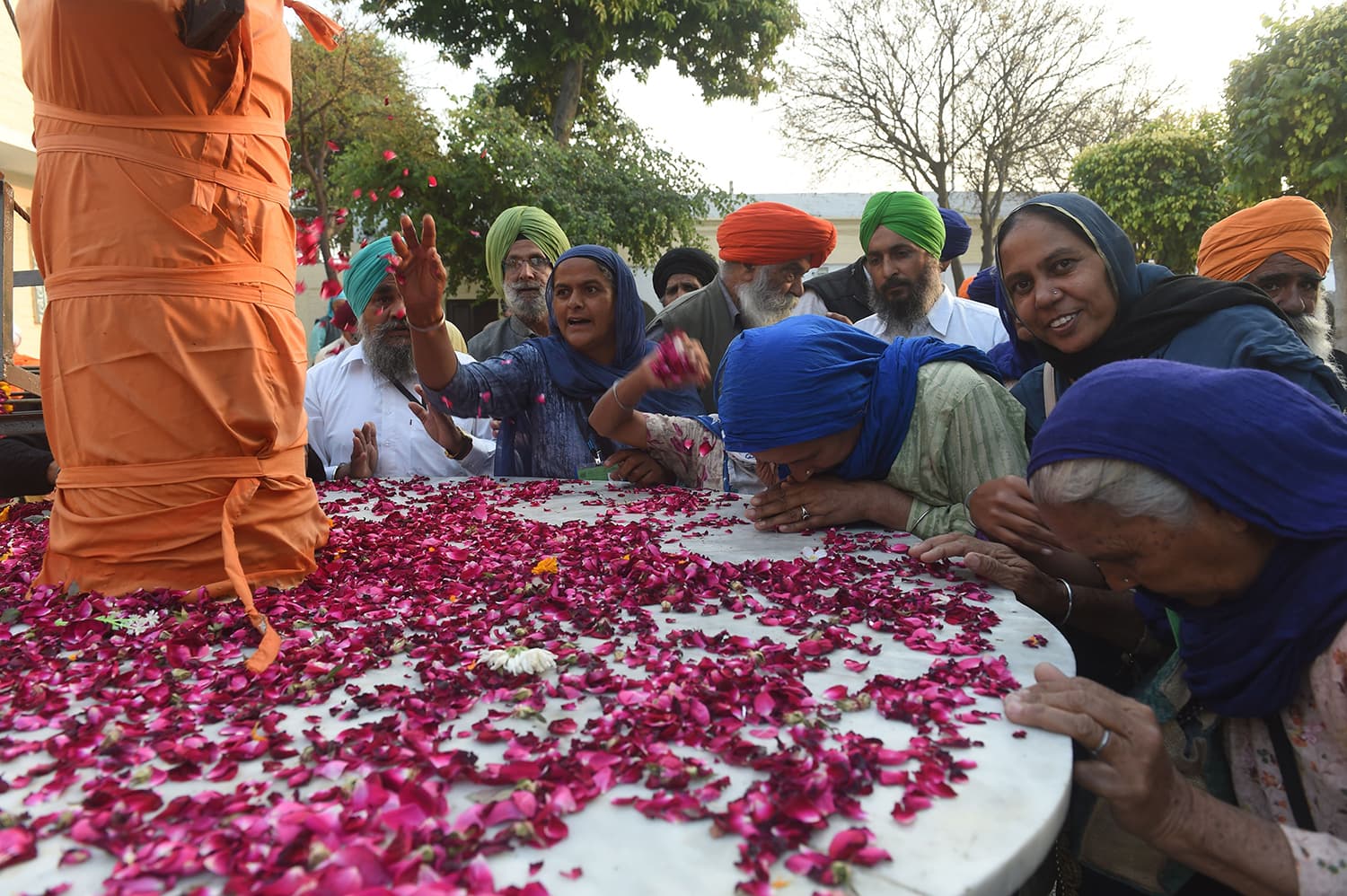 Sikh Pilgrims gather in the Kartarpur Gurdwara Sahib after the groundbreaking ceremony.— AFP

In fact, even when the gurdwara was abandoned at the time of Partition, it was these Muslim devotees of Nanak that continued coming here.

It seemed as if Nanak’s legacy of drawing followers from across the religious divide was still alive.

Harish Dhillon in his book on Guru Nanak writes that when Nanak decided to undertake his spiritual journey, he deliberately took up garb that diluted his religious identity — a loose choga similar to Muslim dervishes, but of reddish ochre, preferred by Hindu ascetics, with a white cloth belt around his waist, similar to fakirs and a cap on his head like the Sufi qalandars. 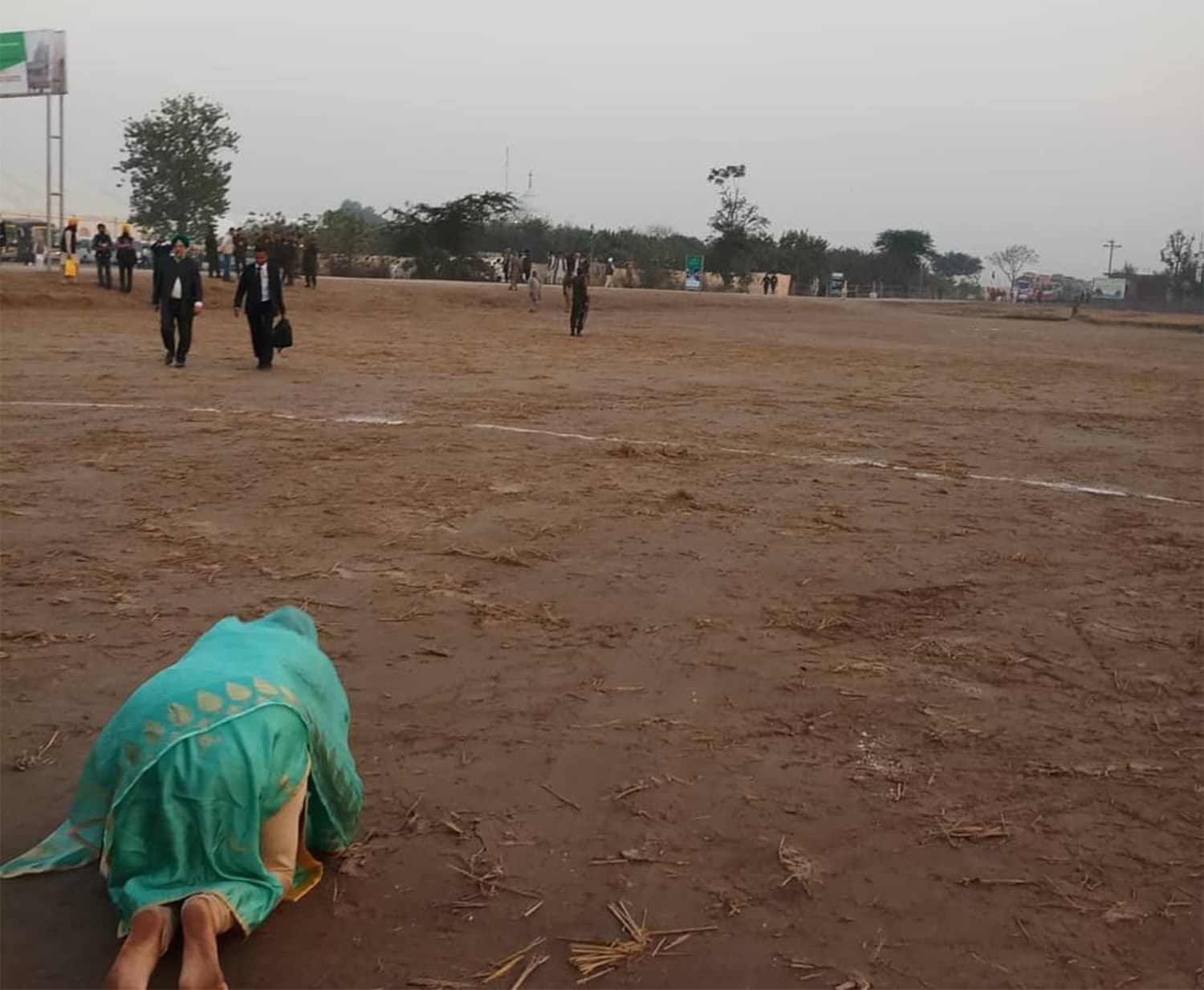 Indian Minister for Food Harsimrat Kaur prostrates herself on the soil in Kartarpur with the Gurdwara Darbar Sahib in view.

Spending almost 25 years on the road, Guru Nanak became one of the most widely travelled people of his era. If not known for his spiritual and poetical philosophy, Nanak would have been known for the extraordinary length and breadth of his journey.

From Talwandi (Nankana Sahib) he is believed to have gone as far east as Bengal, to Sri Lanka in the south, to Tibet in the north and then Arabia in the east, before finally settling down at Kartarpur Sahib where he spent 17 years as a farmer.

These journeys took him to some of the most sacred Hindu, Buddhist and Muslim pilgrimages. Wherever he went, he provoked the followers of these religions by challenging the dogmas and rituals at these sites.

He is believed to have engaged in critical discourse with Hindu Pandits and Muslim Sufis, educating them on their own respective religions. When asked what his message was, he used to retort: ‘There is no Hindu, no Muslim.’ 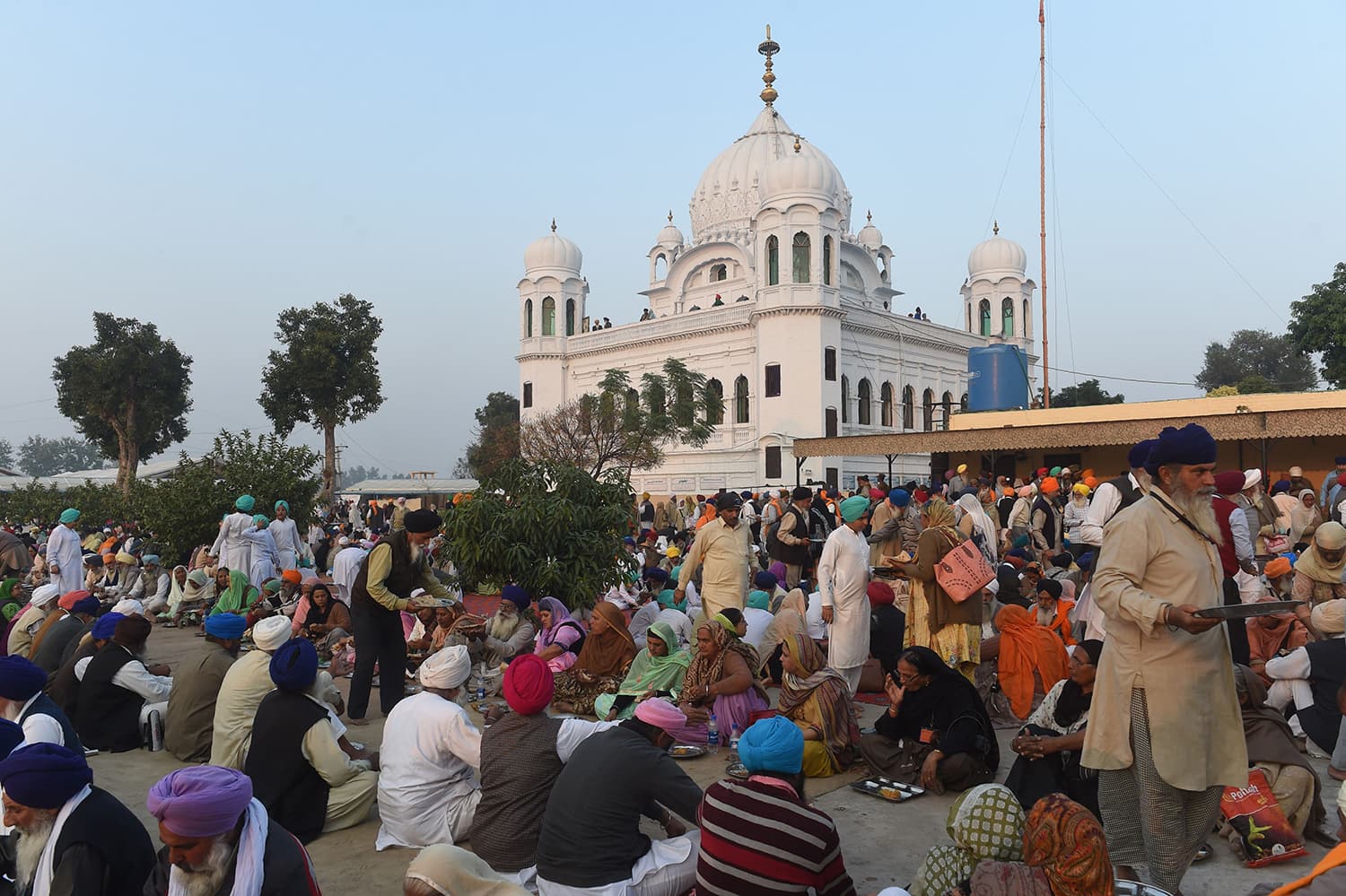 Sikh Pilgrims partake in Langar in front of Kartarpur Gurdwara Sahib after the groundbreaking ceremony.—AFP

This was not meant to be a negation of these religions — rather, an argument that when these religions are practiced in their essence, they all become one, similar to his concept of divinity, which is all-encapsulating and the entire cosmos a part of it.

What Guru Nanak was criticising were dogmatic religious beliefs, superstitions and propped up distinct identities between communities that, instead of bringing people together, became a source of friction. Unity of the cosmos and everything that was a part of it was his philosophical underpinning.

It is therefore apt that it is Guru Nanak and his final resting place that has today emerged as a symbol of some sort of normalisation on the Pakistan-India border, one of the most dangerous borders in the world.

A visa-free corridor, where there is no Pakistani or Indian, but a devotee of Nanak, would be the ultimate tribute to the first Sikh Guru by both countries.

What is even more remarkable is that the site chosen is Kartarpur, where physical traces of this syncretism in the form of a grave and a samadhi are still present. The sanctity of the shrine was upheld by Nanak’s Muslim devotees when it was abandoned and in ruins, while today it has emerged as the ultimate symbol of peace.

However, while the corridor might become functional, it is possible that local Muslim devotees of Nanak might be barred from entering. This is what happened at other Sikh gurdwaras in Pakistan that have been renovated and its administration taken over by the Pakistani government. 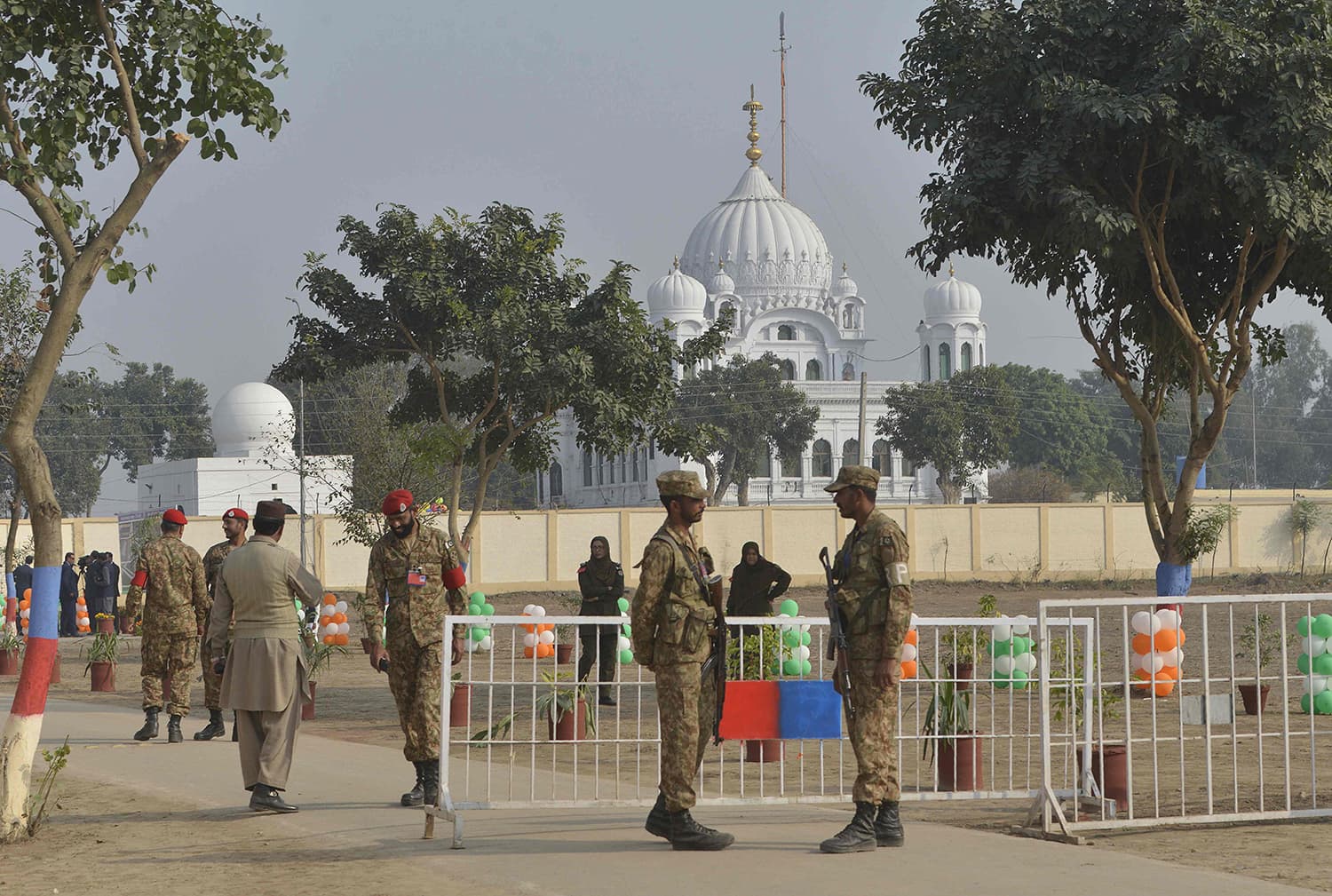 One can hope that the fate of this gurdwara is not a mirror image of some of the other functional ones in Pakistan, that are now restricted to only the Sikh and Hindu pilgrims in the name of ‘security’.

I am delighted that thousands of Nanak’s devotees who have been catching sight of the shrine from afar will finally be able to visit it.

On the other hand, my thoughts go to the local Muslim devotees of Nanak who have upheld the sanctity of the shrine when there was no other.

This shrine belongs to them as much, as it does, to any other religious community. This is what Nanak envisaged.