In January 2007, a 10-year-old boy, Sergio Pelico, hanged himself in his home in Houston, USA. After watching a video of Saddam Hussain’s execution on TV, the boy is reported to have asked, “Is this how they kill people?” to which his family replied “No, but they did it to this man because he was bad.”

Pelico was not the only one to have done so. Within a week or so after Hussein’s hanging at least seven children were reported to have killed themselves around the world, including nine-year-old Mubashar Ali, who hanged himself from a ceiling fan in his home in Rahim Yar Khan with the help of his 10-year-old sister while re-enacting Saddam’s death. Ali’s father is reported to have said that the children had watched the video on TV and tried to imitate the hanging.

Commenting on Pelico’s case, California-based clinical psychologist, Edward Bischof, at that time, had said that the boy may have been mimicking what he saw on TV “without having the emotional and psychological maturity to think through before acting on it.”

He said there have been other cases where children were hurt by acting out wrestling, fighting or other extreme sports they saw on TV. “Children often do not realise the dangers of mimicking such behaviours until it’s too late,” he said.

Experts say such graphic images can severely affect youngsters who are not mature enough to understand the consequences of death and violence. “They see how it’s done, but they don’t think it’s horrific, and they’re more likely to imitate it,” says Hisham Ramy, an associate professor of psychiatry at Ain Shams University in Cairo.

According to Dr Faisal Mamsa, a leading psychiatrist based in Karachi, children watch an average of two to four hours of TV daily. During this time they are exposed to various forms of violence — be it through cartoons, dramas, movies or news. Being in their formative years, children absorb from their surroundings and what they see and hear. It is because of this reason that it is said that watching violent programmes on TV has a negative impact on children.

Mamsa, says, “Television can be a powerful influence in developing value systems and shaping behaviour. Unfortunately, a lot of content aired on TV these days is violent. Research studies have also shown a 12 percent increase in aggressive behaviour after watching violent television.”

Dr Uzma Ambreen, consultant psychiatrist at Pakistan Association of Mental Health, agrees, saying, “When children watch violent programmes it increases the risk that they will become aggressive. It also desensitises them to violence. They also tend to emulate what they see, as children try to copy superheroes, especially as they don’t see the person getting hurt, they do not realise the consequences.” If the message is given that violence is wrong then it is okay, but if there is ambiguity then it is wrong to show such a thing. The problem is that there is no parental guidance.

Violent cartoons, movies, etc. can make children think that the world is a dangerous and unsafe place. If children are frequently watching such programmes they may begin to fear walking outside at night lest they may become victims of a crime, in other words they develop what psychologists call a “mean world” mentality. 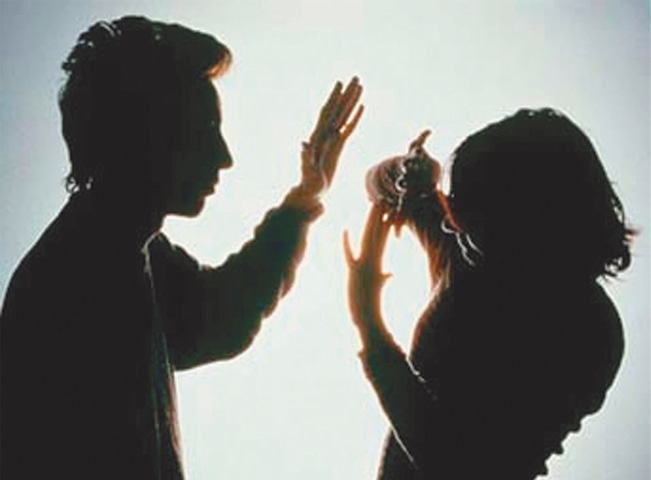 Children are exposed to violence through dramas and movies

The situation is aggravated with news channels blaring news of death, destruction and conflict 24/7 and airing images of dead bodies and bomb blasts. Children, even those who are not attentive, catch some words here and there and are susceptible to forming the impression that the world is not a safe place. They may become scared or they may become immune or desensitised to the horrors of violence.

“Major scientific studies agree that the effects of TV violence generally fall into three main categories: aggression and imitation; desensitisation and callous attitude; and fear and a warped world view,” says Samina Masood Haider, clinical psychologist at Ziauddin University, Karachi. “Children who have emotional, behavioural, learning or impulse control problems can be more easily influenced by TV violence. It is not necessary that the child’s behaviour shows the effects immediately, it can surface years later.”

Out of a number of studies conducted worldwide to assess the impact of watching violence on children, Haider mentions one particular study, known as “the Bobo Doll experiment”, carried out 50 years ago by psychologist Albert Bandura and his colleagues, and which is considered one of the most famous and influential experiments on observational learning. In 1961 and 1963, Bandura and his colleagues studied children’s behaviour after watching an adult model act aggressively towards a Bobo doll, a toy that bounces back up when it is knocked down. It measured children’s behaviour after seeing the model get rewarded, punished, or experience no consequence for beating up the Bobo doll. “It demonstrated one way through which children learn aggression which is through observing others and then imitating these actions. However, Bandura also found that while children were more likely to imitate aggressive behaviour if it was rewarded, they were far less likely to imitate it if they saw the violent behaviour being punished or reprimanded,” says Haider.

Violence on the screen presents violence as an acceptable way of dealing with problems and a means to settling disputes without consequences. As children watch violent shows, they start believing that violence is an appropriate method of solving problems. Since violence on media justifies people’s natural aggressive thoughts and feelings, children begin to think that acting in an aggressive manner such as hitting others to demonstrate anger, jealousy or hurt is normal behaviour. Also, as violent behaviour often has no consequences for TV characters, children might begin to act aggressively as they may not be able to understand the consequences of their actions. It leads them to learn to be aggressive, and when a similar situation arises, they themselves act aggressively thinking that aggression is an appropriate solution to the problem.

Haider says, “Repeated exposure to violence on TV desensitises the children, losing its shock value. Rather, it becomes something mundane and typical. This can lead to children becoming apathetic to the suffering of others.” 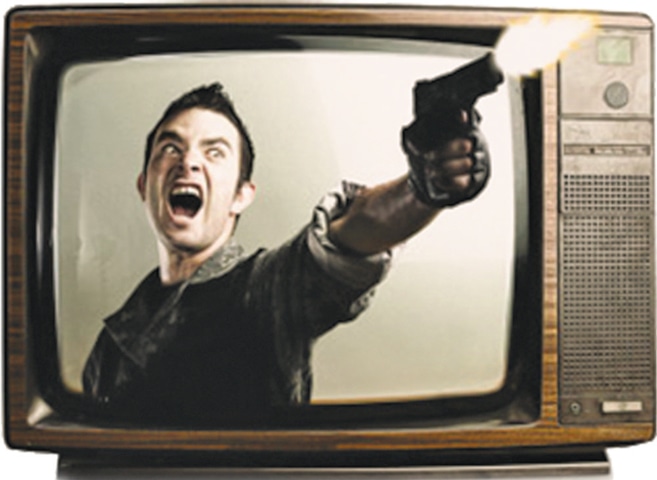 As there is not much control in many households over what children are watching on TV, children are also viewers of local TV dramas/soaps. Not meant for children, these soaps do have violent content. When children see actors slapping others or drawing guns at the slightest pretext, physically or verbally abusing others, or setting them on fire, they are prone to accept resorting to violence as a way of dealing with problems and a means to settling disputes without any regard for consequences.

Similarly, news of abductions and sexual harassment may make the children afraid of going out. When they frequently hear on news TV that the “child left home and his body was found two days later” they may become afraid of going out and think twice before leaving the house alone. “They may lose trust in people after watching a programme that shows abduction or physical, emotional or sexual abuse by others or relatives,” says Dr Mamsa.

Dr Uzma Ambreen says that “a positive thing is that they begin to think that there are bad guys out there and they have to be careful.” On the other hand, “Children begin to feel fearful watching news about abductions and crime and we have had parents reporting fear in children after constantly watching such news. But then, even as adults, we feel stressed if we are glued to the TV watching constant updates,” she adds.

“When children repeatedly view violent interactions, they may develop a distorted view of the world as an extremely harrowing, sinister place,” says Haider. “They may harbour an increased fear of becoming victims of violence, which can cause them to exhibit sleep problems, miss school and withdraw from friends.”

Despite numerous researchers suggesting an increase in aggression due to viewing media violence, some scientists argue the assertion that TV violence makes children more aggressive, saying that there is no evidence of a connection between TV violence and real world violence and how one affects the other. They are of the opinion that other environmental or psychological factors present in a child’s life, such as exposure to real world violence and family attitude to violence, also lead to aggressive behaviour.

Haider mentions an article published in American Behavioural Scientist in 2015, by Craig A. Anderson and his team. The scientists clarify that, even if there is a link between media violence and aggression, it “does not mean that violent media exposure by itself will turn a normal child or adolescent who has few or no other risk factors into a violent criminal or a school shooter … Such extreme violence is rare, and tends to occur only when multiple risk factors converge in time, space and within an individual.

“In my personal capacity I have worked with a five-year-old boy who, according to his parents, was exhibiting increased signs of aggression after viewing violent TV cartoons,” says Haider. “However, it was later identified that media violence was just one of several factors that contributed to his aggression. The other major contributing factors included an abusive family and a hostile school environment.”

Whether TV violence affects a child’s personality or not, parents can protect their children from excessive TV violence. They should monitor what their children are watching on TV and sometimes sit and watch with them. “Parents should not allow children to watch violent shows. They should change the channel when offensive material is being aired, explaining to the child what is wrong with the programme,” says Haider.

“Parents should take care that the TV is not switched on all the time,” says Ambreen. “The problem is that parental guidance is missing. Parents should teach children the right way to behave.”

“It would also be a good idea to limit TV viewing,” says Haider. “The American Academy of Paediatrics suggests no TV at all for children under two years of age and recommends only one to two hours of TV per day for other age groups — that, too, should be filled with educational shows only.”

“The free time that children may have should be utilised in beneficial activities such as reading, playing with friends [board games, toys and puzzles] and developing hobbies,” says Mamsa.

Exercises to Develop an Athletic Physique

Top 10 Morning Exercises To Do At Home